Get out your CLAWS 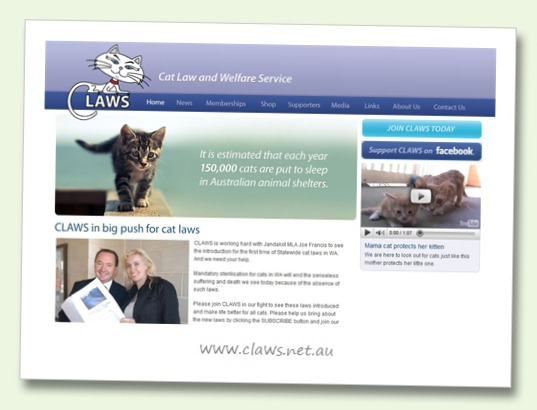 Here’s another site that was launched last year but which missed out on having a news item! CLAWS stands for Cat Law and Welfare Service and this organisation was formed by Hazel Brooks and Mark Fletcher, two local cat lovers who want to make a difference.

According to CLAWS, around 150,000 cats are put to sleep in animal shelters across the country, and it’s estimated that around the same number are cruelly killed or starve after being abandoned. Hazel and Mark’s aim is to get state-wide cat welfare laws introduced into Western Australia – compulsory sterilisation, registration and micro-chipping – in an effort to stop the needless suffering of thousands of unwanted cats and kittens each year. They’re doing this by working with local politicians to raise awareness and campaign for laws to be considered.

The CLAWS web site is powered by WordPress, and hosted by Fasthit. Supporter payments are handled by PayPal. Clever Starfish offer a discount to non-profit organisations that we believe in – and as our office is staffed by two bossy Abyssinians, this is definitely a cause we felt we could get behind!